Chief Executive of Raspberry Pi Foundation. Formerly Nesta, with a background in national and local government, and a track record of setting up and growing social purpose businesses.

In November 2019, I gave my first TEDx talk at the Open University, in which I introduced four amazing young people that I’ve met as part of my work with the Raspberry Pi Foundation.

One of our new colleagues asked me: “is there anything I should be reading before I join the team?” Great question.

I was drafting an email with some suggestions when it occurred to me that it might be more useful to post it as a blog. I hope that you find it interesting, but I also hope that you’ll use the comments to share suggestions of blogs, articles, books, and talks that you would recommend.

First a caveat, a declaration, and some thanks.

The caveat is that this isn’t intended to be a comprehensive reading list for computing and digital making. It’s meant to be a starting point, albeit one that reflects the values and biases of the Foundation. There is a huge amount written about computers and education, and I am not trying to create a literature review (although if someone has one, I’d love to see it).

The declaration is that you’ll notice that a lot of this is from people that work for or who are otherwise associated with the Foundation. I am not trying to promote the home team, it’s just that we hire and work with the best people in the field, so it’s kind of inevitable I’d recommend their stuff.

The thanks are to the people who have provided suggestions for this list, even though they didn’t know they were doing so at the time. In particular Jack Lang, Carrie Anne Philbin, Oliver Quinlan, and Simon Peyton Jones. Only the mistakes are mine.

If I was only allowed to pick one book, then it would probably be this. First published in 1980 and still relevant. Papert draws on the research conducted at MIT that led to the creation of the LOGO programming language, Turtle robot, Lego Mindstorms, and ultimately Scratch.

He argues persuasively that, in the hands of children, computers can be powerful tools for learning. He advocates a constructionist approach, where students learn through the experience of making things with computers. The ideas in this book influence pretty much everything we do at the Foundation, from Code Club to our teacher training programme Picademy.

While I love Papert’s book (and heartily recommend you read it), it was written for academics and so it can sometimes be a little hard going.

Invent to Learn by Martinez and Stager is much more accessible and a good place to get started.

Often described as the manifesto for the maker movement in education. The authors manage to cover the intellectual underpinnings, philosophy, and research, as well as providing practical guidance and a comprehensive list of resources. This is one of the books that should be handed to everyone on the first day of teacher training and should be required reading for government ministers of education.

An exploration of the emerging field of digital making for young people in the UK. This is a neat little report that shares the findings from research that looked at the demand for opportunities to learn about digital making from parents and young people, and the organisations trying to meet that demand.

The sharp-eyed among you will have noticed that the author (Oliver Quinlan) joined the Foundation in January 2016 to lead our research efforts. More from Oliver below.

Tilly Blyth, The legacy of the BBC Micro

Another report published by Nesta, this one from Tilly Blyth, keeper of technologies and engineering at the UK’s Science Museum, and also a Member of the Raspberry Pi Foundation.

It’s a comprehensive history and analysis of the computer literacy project in the 1980s, which gave the world the BBC micro. Blyth tells the story, gives us an insight into the people involved, and explores the impact on education, culture, and the economy. More than anything, I read this as a challenge to all of us involved in the field of digital making to have big ambitions. 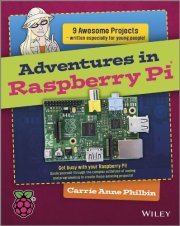 There are lots and lots of books available for people who are new to Raspberry Pi computers and it can be hard to know where to start.

Adventures in Raspberry Pi – written by the Foundation’s very own director of education Carrie Anne Philbin – is the one that we recommend for young people getting started with computing and digital making.

As with everything Carrie Anne writes, it’s wonderfully accessible and engaging, combining real learning with lots of fun. I should also say that, while it’s written for kids, it’s also a good place to start for adults who are new to computing.

If Adventures in Raspberry Pi is the recommended book for kids, then Richardson and Wallace’s “Getting Started…” published by Make is the book I recommend for adults who are new to Raspberry Pi computers.

It’s also brilliantly accessible and packed full of practical projects that show off the capabilities of the Raspberry Pi, including lots of great ideas and tutorials for physical computing. Matt now heads up the Foundation’s work in the US.

The “Pi” in Raspberry Pi stands for python (yes, we know we can’t spell), which we think is the best text-based programming language for education. Before anyone freaks out in the comments, we also help people learn other programming languages, but we reckon that python is a great place to start.

In this short book, Tollervey – a former teacher, turned programmer – explains what python is, how the community works, and why it is such a powerful tool for education. It’s a great read and free to download from O’Reilly.

This is just cheating, but I would be mad to exclude it. The founder and chair of the UK’s Computing at Schools network (and a Member of the Raspberry Pi Foundation), Simon Peyton Jones, curates his own reading list focused on the changes to the English computing curriculum. You might need to create a CAS account to view the list, but you should probably do that anyway.

This is a weekly education technology newsletter curated by our very own Oliver Quinlan. It’s a treasure trove of news, links and generally interesting stuff around the general theme of how technology is or isn’t changing education.

There are lots and lots of education blogs out there, some of which even talk about technology,  and you can have a lot of fun exploring them. My personal favorite is Audrey Watters’ Hack Education, which can always be relied on for a thoughtful, challenging, well researched long-read.

And finally, I thought I’d suggest a few TED talks in case you want a change in format.

Mitch Resnick of the Scratch Foundation and MIT explains what Scratch is and how it’s helping kids all over the world learn how to code.

Clare Sutcliffe, co-founder of Code Club, and now the Foundation’s executive director of communities, explains the origins and purpose of Code Club.

Hadi Partovi co-founder of Code.org and the Hour of Code with a great explanation of why computer science is foundational knowledge.

Simon Peyton Jones (again) on the case for putting computing into the curriculum.

It’s been a little over seven months since I joined Raspberry Pi Foundation as chief executive.  Much of that time I’ve spent with the team, trustees, partners, and the wider community, thinking about how we can best contribute to the movement of digital makers that is growing around the world.  How do we articulate our mission? How can we use our expertise and resources?  What do we stand for?

Hundreds of people contributed their ideas and many more provided inspiration through their actions.  One of most remarkable things about Raspberry Pi is the amazing community that has grown around us and from which we take our lead.

In December the Board signed off a new strategy for the Foundation.  It’s a work in progress and I like to think of it as our strategy 1.0.  There’s no doubt we’ll need to adapt and evolve it as we learn more, and some big questions haven’t yet been answered. But, it feels like a significant step forward in ambition, clarity, and openness.  It’s certainly exciting to be working with the team to figure out how we put it into practice.

Please take a few minutes to read through the slide deck, talk it through with some other people, and let me know what you think on the comments or by email.  Thanks in advance for your contribution.